anima [æ'nimə] n. ([Latin—life, breath]) Soul, spirit.
animal [æ'niməl] n. An organism of the kingdom Animalia; generally has motility and must ingest other living things to survive. animate [æ'nimeit] vt. To give life or vitality to something; to encourage or inspire.
animation [œniméiʃən] n. Vigor, vitality. animato [à:nimá:tou] a. ([It]) [music] Lively. animator [æ'nimeitə] n. A person or thing that imparts life or vitality; (an artist who produces animated films)

Allow me to introduce three gentlemen: Kuri Yoji, Yanagihara Ryohei, and Manabe Hiroshi. The general public knows them as cartoonists. In fact, however, they are animators, in the sense of “people that impart life or vitality.”

Kuri Yoji looks on first sight like a typical family man. Around ten years ago, there weren’t more than six grains of rice in his rice bin, but today he is a self-made man who runs his own film studio. He also produces COO, his own comic magazine, which has released four issues so far.

Yanagihara Ryohei has the look of a salaryman. In fact he is a salaryman, and makes no apologies for it. His animated commercials for Kotobukiya, however, are brimming with woe and grotesquerie. He doesn’t seem like the kind of guy who gets drunk on cheap liquor like the Torys Whisky his work sells.

Manabe Hiroshi is a devoted husband and father, and with his partner—a devoted wife and strict mother—by his side, his home life is the very picture of happiness. Whatever venom he secretes is channeled into his visually assaultive artwork. Truly a soto-Benkei. Anyone who views his work and does not find a reflection of him- or herself in it would best be advised to move to Texas.

Yanagihara Ryohei is…well, to tell the truth, I’ve only met him two or three times, perhaps not enough to tell you what he is. I can tell you, though, that his Pikaro jii-san comic strip in the Asahi Shimbun newspaper leaves me wanting more. Rather than the works of subtle malevolence he’s creating now, I’d like to see him producing works of out-and-out malevolence.

It is no concern of mine whether the three of them are friends, merely business partners, or for that matter, locked in a love triangle. What’s important is that they form a gallery of rogues, each having his own bitingly distinct flavor, not merely collaborators teaming up because three heads are better than one. I have no doubt they’ll generate new visions that transcend the narrow boundaries of cartooning.

An amoeba splits and reproduces itself, a solitary tiger pounces, a little girl shrinks in sudden bashfulness. I would like to see animation that rivals the beauty pervading each of these, the myriad movements that make up the living world. 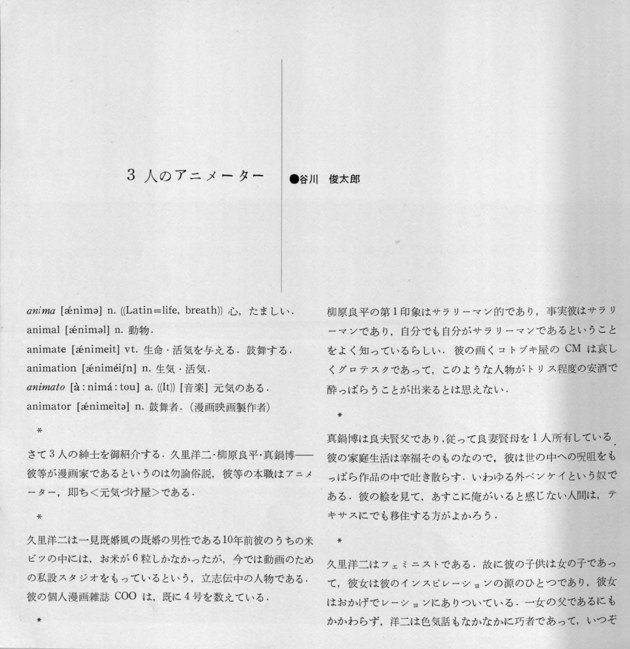 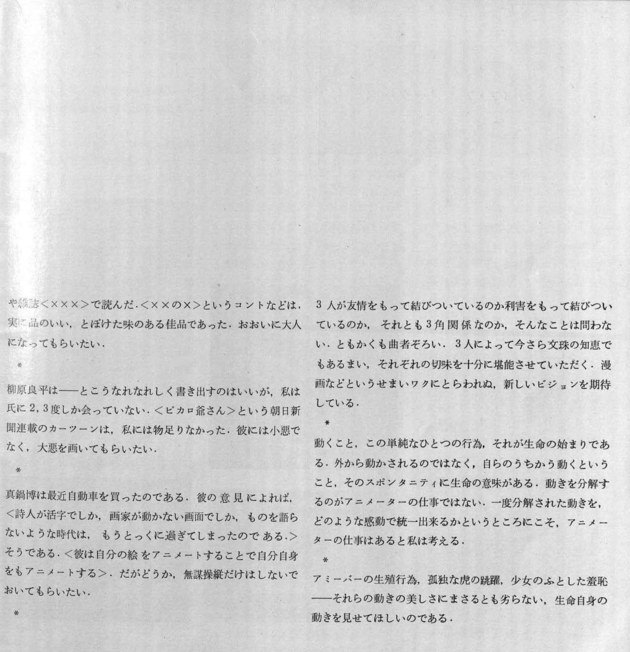