“While currency instability promotes a flow of capital toward functional goods and furniture, while societies speculating in art are founded and prosper, while the art market undergoes increasing integration with the wider system of capitalist, consumerist exchange, an activity such as this (MAIL ART) escapes the system by avoiding it, questioning it partly by affirming it, in today’s world, the viability of a system opposed to the dominant one. Some will take issue with this, objecting that the products discussed here are of minimal importance, that they cannot have any impact on the dominant market system, but this is not where the problem lies. Such artistic production demonstrates in a highly effective way how (even symbolically) every aesthetic activity creates problems at a political and economic level without needing to be located in the realm of ideology and revolutionary programs.”

This quotation from Poinsot, taken from the only theoretical text in the catalogue of the LAST INTERNATIONAL EXHIBITION OF MAIL ART ’75 (Galería Arte Nuevo, Buenos Aires, December 1975), clarifies the way in which some creators of this brand-new trend of marginal, creative communication are politically committed. This article will not chart the development of this trend, but instead will locate it within the REVOLUTIONARY ART PROCESS (rather than the transitory subversive path).

These media without a reply, as Baudrillard highlights, are composed of all the outlets of mass communication that TRANSMIT without allowing the receiver to REPLY. The spread of the mass media creates a parallel need for TRUE INTERCOMMUNICATION. Some forms of mass media, however, do allow the formulation of a critical dialogue after the event, but without affecting the result, which will continue to be emitted intact (such as in the case of a video or film). This becomes a hollow reply, although it is important to highlight its positive function as a factor that UNLEASHES DIALOGUE.

In MARGINAL COMMUNICATION there is a tendency to reject technology, inclining toward the manual and above all toward A NEED TO COMMUNICATE BETWEEN INDIVIDUALS ("Who is no one?" Edgardo Antonio Vigo, Hexágono ’71, 1972/73, La Plata, Argentina), without requiring a commercial telegraphic, dehumanized TOOL to enable dialogue. This prioritizes a true communication where the perception of the impact of the word or the creative instance constantly re-creates and renews the dialogue, without hiding the array of reactions produced.

Within MARGINAL COMMUNICATION we find DISTANCE contact. This is the current within which MAIL ART is situated. Employing the oldest medium of mass communication (a transmitter of all types of news by the user), MAIL ART has established an international chain of creators that grows day by day.

I do not believe in a “subversive” character, but in one that is revolutionary, a concept that requires clarification. I do not agree that a work can, in itself, be revolutionary. On the contrary, the work is the product of a revolution. I believe in the WHOLE REVOLUTIONARY PROCESS OF ART which, rooted in its nonconformism, demonstrates constant creativity in its experimentation and will be hastily cast aside by the Official, forced into the straitjacket of Mannerism or simply inserted within a REWRITTEN HISTORY OF ART. MAIL ART, alongside numerous investigative contemporary trends, will no doubt be incorporated into this REWRITTEN HISTORY OF ART. These predictions of the future run the risk of being mistaken, as it is known that, left to his own devices, man asserts the abusive right to possess objects and, moreover, is obsessed with collecting and valuing the things he POSSESSES. Besides status, the materialistic conversion of art into an economic object has imbued man with an attitude that lurks out of sight, ready to pounce unexpectedly, seizing ownership of the purest objects in order to bastardize them.

However, this is where we find a COMMITTED ATTITUDE on the part of the MAIL ART practitioner. This lies in remaining at a distance from the siren songs of Museums and Galleries; it lies in escaping the “subtle commercial networks” of collectors; it lies in becoming a “CONSTANT SPEAKER, RECEIVER, AND TRANSMITTER,” not only of the practitioner’s own works, but also of those produced by others. Understood in this way, there is no risk of confusion. This does not even disrupt the results or the fractional logic of pseudo-creators, who, constantly seeking to insert themselves within a tradition, enroll in this current, without principles or conviction, in order to exploit it.

“Mail Art: A New Stage in the Revolutionary Process” is the title of this article, underpinned by a firm belief in the truth of this assertion, founded on mail art’s basis in the following guiding principles:

It establishes new means of communication (using the classic forms of postal communication, being conscious of limitations, creating new languages born of the constant habit of eluding the obstacles thrown in its path: censorship, lack of understanding, losses, absurd rulings, evaluations, etc., etc.);

It is investigative and experimental, as its efforts are recent and its practice constitutes a brand-new form of expression subject to new conditioning factors;

It is aligned with MARGINAL DISTANCE COMMUNICATION, with the favorable divergence of creating in its practitioners the UNAVOIDABLE NEED to enter into direct contact, to feel “ENVELOPED IN A COMMON PURPOSE” and to be RETRANSMITTORS of works created by others;

It ruptures the traditional concept of the “collector” (who is individualistic, commercial, and possessive), transforming this figure into a “MERE TEMPORARY OWNER,” committed to the possibility of new communications that transfer, convey, and disseminate the principles this art represents;

It is revolutionary, uniting with all the historical currents that have broken with accepted forms to create a state of “CONSTANT DISSATISFACTION, WHICH LEADS MAN TO STRIVE FOR IDEALS AND PERFECTION”;

And it contains, in some of its messages, the requisite dose of nonconformism, subversion, global relations, and individual relationships that transform it into a “CRITICAL TESTIMONY OF SOCIO-POLITICAL-ECONOMIC REALITIES,” creating the means of eluding the “Official,” the principal originator of all the traps and difficulties imposed upon Creation.

ART RELIES ON ALL THE FIELDS THAT ARE NOT SPECIFICALLY ARTISTIC.

IT IS AN INDEPENDENT, AUTONOMOUS SPHERE ONLY IN TERMS OF ITS OWN POETIC LANGUAGE.

A POETIC LANGUAGE IS A SYSTEM OF MEANING FOR THE COMMUNICATION OF IDEAS.

IT EXISTS THROUGH CONSTANT INVESTIGATION AND EXPERIMENTATION, OR IT CEASES TO BE POETIC.

ARTISTIC PRACTICE CONSISTS IN THE INTEGRATION OF AN INVESTIGATIVE POETIC LANGUAGE AND A CLEAR, CONCRETE POLITICAL IDEOLOGY.

IF THE ARTISTIC PRODUCT IS THE RESULT OF THE SEARCH FOR IDEAS FELT OR THOUGHT BY ALL (IN NON-ARTISTIC SPHERES), IT WILL BE CONFIRMED AS SUCH IN THE MINDS OF THE PARTICIPATING SPECTATORS, WHO ULTIMATELY VERIFY THE NEED FOR ITS EXISTENCE.

THE ARTISTIC PRODUCT WILL THEREFORE BE THE OUTWARD EXPRESSION OF THE CONNECTIONS COMMONLY MADE IN OUR MINDS. 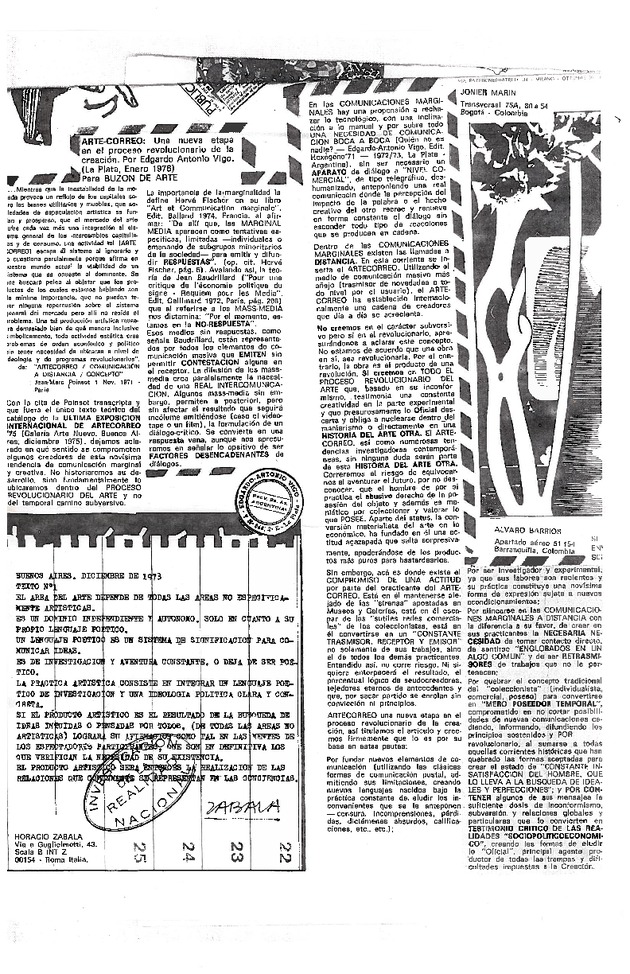