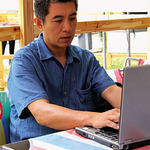 Xu Tan (born in Wuhan, Hubei Province, 1957) is an artist who currently lives and works in Guangzhou and Shenzhen, China. Xu attended the Guangzhou Academy of Fine Arts, where he received his B.A. in 1983 and then his M.A. degree in Oil Painting in 1989. In 1993 Xu became a member of the Big Tail Elephant Group, participating in the group’s exhibitions from 1992 to 1996 in Guangzhou, and in 1998 in Bern.

While Xu’s formal background is in painting, he works in many mediums including video, performance, and installation. Xu’s work concerns cultural and social change and often incorporates text and image. For example, Xu’s recent project Keywords School, a mobile project collecting cultural “keywords," both in China and abroad and engaging in participatory models.

Revisiting this Big Elephant Group discussion in 1993, I must say that, with 20 years gone by since then, much has changed including the environment and our own mentalities. There are at least two things that I had not realized back then. First, I would never have imagined that the “avant-garde art” of the time (nowadays we call it “contemporary art”) would be so much influenced by today’s market and capital. Second, we were then way too optimistic about the withdrawal of a totalitarian Chinese government. In the early 1990s, there was an optimistic atmosphere that surrounded southern China (and perhaps many places around the globe). Consumerism had first landed in China along with its lifestyle and culture, the Chinese government had loosened its control, and the financial circumstance of common people had clearly begun to improve. I felt a sense of relief, thinking that this was the beginning of some post-modernist lifestyle. Looking back now, I realize I was too naïve. When I look around me now, on one hand I see drastic changes in the artistic world, on the other I see that the society’s awareness has weakened, including its resistance to totalitarianism and its will to pursue democracy, which have slowed down. However, there is one thing I can say without doubt: I have never changed in my fundamental philosophy of art, which includes art for art’s sake and introspection.

The Big Elephant Group in the 1990s always tried to surpass the “Orientalism” so popular at the time as well as the trendy Chinese political symbol. We confronted and reflected upon “politics” as well as our early living conditions mingled with consumerism. Apart form that, we tried to present all of our observations and studies of the society with rich artistic language. This effort might seem frail if seen from today given its idealistic mentality, but such effort has never cease to exist in our works that followed through the years.

Revisiting this Big Elephant Group discussion in 1993, I must say that, with 20 years gone by since then, much has changed including the environment and our own mentalities. There are at least two things that I had not realized back then. First, I...