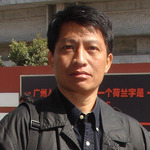 Liang’s work was not medium specific; he worked in installation, sculpture, video, photography, and performance. In his performance One-Hour Game (1996) in the workers’ elevator of a construction site, Liang played video games for an hour. This act is often cited as an example of how Liang and the Big Tail Elephant Group created moments of transcendence of place.