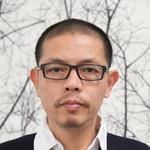 Chen Shaoxiong was born in Shantou, Guangdong province, China in 1962 and lived and worked in Beijing until his death in 2016. Chen graduated from the Print Department at Guangzhou Academy of Fine Arts in 1984. Chen worked both independently and as a member of two artist collectives, “Project without Space” and “Xijing Men.” In 2007 Chen founded “Xijing Men” with Tsuyoshi Ozawa and Gim Hongsok, while in 1990 he was a founding member of the Big Tail Elephant Group.

In 2000 and 2006 Chen was the recipient of the Chinese Contemporary Art Award. In 2013 Chen was a Bellagio Creative Arts Fellow, where he developed works combining themes of contemporary art forms, social movements, and collective action.

I think of ourselves as brave, living in the 1990s, fighting against society's mainstream values of the time with our limited individual forces. We were just a small, self-supported group, and yet we were delivering on the whole Guangdong’s regional culture. When I look back, I see a naïve soul in myself, one who is a loner, one who bears pride and eccentricity. Although I must confess I find some of my works of that time a little premature, I treasure their bookishness and the language I developed in them. They were less influenced compared to present works, and thus are free from pleasing motives and trending standards. Moreover, all my present works have their roots in my 90s artworks, from language to concept and from philosophy to media application. On one hand, to an artist, such progress and its extension are indivisible. On the other hand, we live in a time of great changes, and everything in the 90s seem to be so far away.

I think of ourselves as brave, living in the 1990s, fighting against society's mainstream values of the time with our limited individual forces. We were just a small, self-supported group, and yet we were delivering on the whole Guangdong’s...