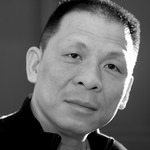 Lin Yilin (born in Guangzhou, China, 1964) is a performance and installation artist who currently lives and works in New York and Beijing. Lin graduated with a degree in sculpture from the Guangzhou Academy of Fine Arts (1987).His work has been exhibited globally in solo and group exhibitions. Lin Yilin is a founding member of the Big Tail Elephant Group.

The Big Tail Elephant Group is an artist collective founded in 1990 by Lin Yilin, Chen Shaoxiong, and Liang Juhui and later joined by Xu Tan. The group formed in Guangzhou, China, with an interest in urban development and the rapid transformation of modern cities, Guangzhou being among the earliest cities in China to undergo this shift. Lin produced site-specific installations, public artworks, and performances to express his perspective on Guangzhou’s rapid social and political transformation.

Lin first exhibited work with Big Tail Elephant in 1991 at the Guangzhou No.1 Worker's Palace, Guangzhou, China, and regularly continued to show work with the collective through the 2000s. In 1997 Lin participated in Trade Routes: History and Geography, 2nd Johannesburg Biennale, South Africa. Then in 1998 he was included in Inside Out, New Chinese Art, presented by the Asia Society at P.S. 1 Contemporary Art Center, New York, USA, as well as the 1998 Taihei Biennale at the Taipei Fine Arts Museum, Taiwan.

Mao Zedong taught us this: Always self-criticize. I remember when I was at the elementary school, we were asked to write a “self-evaluation” at the end of each semester. Part of this evaluation consisted of our recognizing our own faults, yet, interestingly enough, almost everyone gave cookie-cut answers that varied little. So to reflect on this piece – a discussion that took place 20 years ago – does not seem very meaningful to me. That being said, since these words are to be published, some clarification is in order.

Big Elephant Group was established shortly after the Cold War ended, a time when globalization hadn’t fully taken over the world yet. On the one hand, we were critical to the New Wave Movement in China in the 1980s that bore attributes of Modernism, because it happened in the isolated context with no communication with the international art scene. On the other hand, we sought to surpass Western contemporary art. Because I am against socialist-realism, I turned to pursue a Utopian, new art form in my works. However, without a societal context of discourses, this individual system that relies on solitary imagination becomes weak and can hardly support itself. Three months after the Big Tail Elephant internal meeting in 1993, I adjusted myself and changed directions, and my works turned to efforts of impacting the society from an individual artist’s point of view. After the year of 2000, I have had various opportunities to create artwork in the contexts of different countries, and this sort of influence had to come from opportunities given by the local system; I didn’t belong to those systems, I only came and went between them. A system equates its society, which equates a power of control. I have always pondered about what sort of new weapon could help us fight against this globalized system that becomes more and more rigid each day. Clearly, art itself would not be the weapon. Perhaps this is an unoriginal concern, and yet again it has become an obstacle.

Mao Zedong taught us this: Always self-criticize. I remember when I was at the elementary school, we were asked to write a “self-evaluation” at the end of each semester. Part of this evaluation consisted of our recognizing our own faults, yet,...