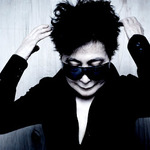 Yoko Ono (born Tokyo, 1933) is a Japanese multimedia artist, composer, and musician, active also in the U.S. and the U.K. Born into a prominent Japanese banking family, Ono spent her childhood living in both America and Japan, following her father’s banking career. She became the first female student to enter the philosophy course at Gakushiun University in Tokyo in 1952. At the end of the year, the family moved to Scarsdale, NY, and Ono enrolled at Sarah Lawrence College. In 1955, she eloped with composer Ichiyanagi Toshi, dropping out of her course and moving to Manhattan, where she became involved with avant-garde art and music communities. From December 1960 to June 1961, she hosted a series of performances organized with La Monte Young at her downtown loft. A one-person exhibition at Fluxus founder George Maciunas’s AG Gallery and a major solo concert at Carnegie Recital Hall followed in 1961. An original participant in Fluxus, she remained aligned with this loose-knit group throughout her career, while consistently pursuing wholly independent work. Returning to Tokyo in the spring of 1962, she showed a series of Instruction Paintings, early conceptual text pieces, at the Sogetsu Art Center, where she also presented another major solo concert. One of these instruction pieces, Painting To Be Constructed in Your Head, for example, begins: "Go on transforming a square canvas in your head until it becomes a circle…." In 1963 she married the American art promoter Tony Cox.

In July 1964 at a concert in Kyoto, she introduced her performance work Cut Piece, in which members of the audience were invited onto the stage, one at a time, to cut off her clothing. One of her most important works, it is often cited as an early example of feminist performance. She also published Grapefruit, a book of instruction pieces, at this time. Having returned to New York in September 1964, she performed Cut Piece and other works at Carnegie Recital Hall in 1965. Her IsReal Gallery works (1965), placed as advertisements in the New York Arts Calendar, promoted "exhibitions" such as Draw Circle Event that readers were to perform in their imaginations or on the magazine’s pages; no physical gallery existed. The Instruction Paintings, Cut Piece, and IsReal Gallery works exemplify her characteristic strategy of requiring viewers to actively collaborate in the realization of her work.

Relocating to London in September 1966, she soon established herself there as a major artist. At her Indica Gallery exhibition of conceptual objects in November 1966, Unfinished Paintings and Objects by Yoko Ono, she met Beatle John Lennon, with whom she would establish a personal and artistic partnership from May 1968 through his death in 1980. During her London period, she became known not only for her exhibitions and performances, but as a filmmaker as well. No. 4 (Bottoms) (1967) features a continuous series of tightly framed shots of human buttocks moving up and down as performers walk on an unseen treadmill. The soundtrack consists of actors’ randomly sequenced candid commentary. A censorship controversy resulted, and Ono’s reputation grew in the popular as well as the art press, with the Liverpool Daily Post dubbing her the "high priestess of the happening." In her 1967 Lisson Gallery exhibition Half-A-Wind, she showed household furnishings cut in half and painted white.

Ono’s public collaboration with Lennon debuted in June 1968 with the exhibition Four Thoughts: Yoko Ono and John Lennon at London’s Arts Lab. They also released an album of musique concrete, Unfinished Music No. 1: Two Virgins, the first record issued on the Beatles’ Apple label, later that year. The couple’s collaborative performance works, such as the Bed-Ins (1969), brought unprecedented attention to avant-garde performance. Following their marriage in March 1969, they announced that their honeymoon suite would be open to the world press. Expecting something scandalous, reporters found the couple in their pyjamas, ready to engage them in a discussion about world peace. War Is Over! (1969), an international billboard and poster project extended the couple’s peace activism. Yoko Ono/Plastic Ono Band (1970), also released on Apple, was Ono’s first foray into rock music. In October 1971, her first retrospective exhibition, This Is Not Here, opened at the Everson Museum in Syracuse, NY. Her next major solo exhibition, Yoko Ono: Objects, Films, at the Whitney Museum of American Art in New York in 1989, included bronze versions of earlier conceptual works. She continued to exhibit frequently, showing new work in many media. A travelling survey exhibition, Yoko Ono: Have You Seen the Horizon Lately?, opened at the Museum of Modern Art, Oxford in 1998. In October 2000, Yes Yoko Ono, a major retrospective, opened at New York’s Japan Society, travelling internationally through 2004.