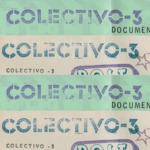 The artists' group Colectivo 3 was active between 1981 and 1985. Its members were Araceli Zúñiga, Blanca Noval, Aarón Flores, and César Espinosa. The group was specifically dedicated to mail art and promoted works and exhibitions such as the Poema Colectivo: Revolución and the mail art "marathon" 1984 in 1984: What future do we look for?. Colectivo 3 was formed after the dissolution of the former group El Colectivo, which was active between 1976 and 1979, and had been conceived to deal with social and urban issues. The members of this earlier collective were Araceli Zúniga, Aarón Flores, César Espinosa, Francisco Marmata, Blanca Noval, Pablo Espinosa "Gargaleón," and Antonio Álvarez Portugal.

Mail Art from Mexico (via the world): An Erratic Investigation Read More »