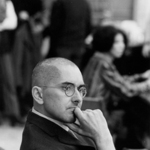 George Maciunas (born Jurgis Mačiūnas in Kaunas, Lithuania; died New Marlborough, Massachusetts, 1978) was the founder of Fluxus, the influential international art group known for its performances, happenings, and events, primarily in the 1960s. He also played a pioneering role in the establishment of New York's SoHo neighborhood as an artists' community in the early 1970s.

In 1948, Maciunas and his family emigrated to the United States after a brief period in Germany. At various universities there, he studied art history, graphic art, architecture, musical theory, and European and Siberian art of migrations, from 1949 to 1960. From his student days on, Maciunas was deeply interested in the systematization of knowledge using diagrams, atlases, and charts.

In 1960, when Maciunas was still involved in the Lithuanian diaspora of New York, he conceived his first plans to publish a magazine called Fluxus. In 1961, in the AG Gallery in New York that he ran together with Almus Salcius, he organized concerts with artists like Dick Higgins, Yoko Ono, and Jackson Mac Low, which can be categorized as pre- or proto-Fluxus. Later that year, he moved to Germany (Wiesbaden) and met Emmett Williams, Nam June Paik, Ben Patterson, and Wolf Vostell. In September 1962, the first series of concerts organized by Maciunas, the International Fluxus Festival of the Newest Music, took place in Wiesbaden, attracting considerable attention and unsettling the public, mainly due to the complete destruction of a concert grand piano (the performance was part of the piece Piano Activities, by Philip Corner). As a fervent Communist, at this time Maciunas was also committed to the union of “revolutionary-realist artists” and the “revolutionary-realist society” of the USSR as the main aim of Fluxus. However, numerous plans for travel to or transferring the Fluxus “collective” to the former Eastern Bloc were not realized. Having returned to the U.S. in 1963, Maciunas continued to be the main organizer of numerous Fluxus events and the self-​appointed President of Fluxus. There was serious discord within the Fluxus network in 1964, due to Maciunas’s and Henry Flynt’s protest actions against Karlheinz Stockhausen’s Originale.

Maciunas published numerous editions by the artists of the network (which he himself designed strikingly) and in 1966 planned the Fluxhousing Cooperative, which established SoHo as an artists’ neighborhood. In 1975, Maciunas withdrew to New Marlborough, MA, where he died of cancer at the age of forty-six, in 1978.