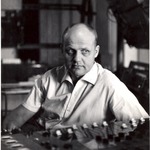 Józef Patkowski (1929-2005) was the founder of the Polish Radio Experimental Studio (1957), which he directed till 1985. Since the early 1950s he lectured in acoustics, electro-acoustic music technologies, and 20th-century musical aesthetics at Musicology Department, Warsaw University; later also at the Music Academy in Katowice, and the Music Academy in Cracow. There he founded the Electronic Music Studio in 1974, which he ran till 2000. Patkowski lectured internationally on subjects related to electro-acoustic music and Polish contemporary music. He also frequently sat on the jury of international competitions for composers. In the early 1960s, together with a group of musicians (Zygmunt Krauze, Tomasz Sikorski, Zbigniew Rudziński, and John Tilbury) he initiated and organized The Music Workshop, a cycle of avant-garde music concerts. In 1960-2000 he was a member of the Program Committee for the “Warsaw Autumn International Festival of Contemporary Music”; Extremely influential festival that shaped the understanding of contemporary music among Polish society in the second half of 20th century. In the 1960s, together with Krzysztof Szlifirski, Patkowski wrote music for documentaries, film impressions, feature films and theatrical plays.

The Future Sound of Warsaw: Introduction to PRES Read More »