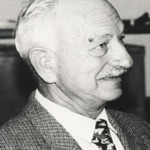 Andrzej Dobrowolski, (1921-1990) played a key role in the history of Polish music for tape determining - together with Włodzimierz Kotoński, Zbigniew Wiszniewski and Bogusław Schaeffer - the directions in which it developed until the 1970s. He was professor at the State Higher School of Music in Warsaw and at the Hochschule für Musik und Darstellende Kunst in Graz, where he was engaged with the Institut für Elektronische Musik. Dobrowolski was one of the first users of Polish Radio Experimental Studio, where he recorded his Music for Tape No. 1 in 1962. The input sound material was derived from a variety of sources, and the publication of the score of this piece was an extraordinary event: works for tape usually exist only as a unique studio recording. In 1966, Music for Magnetic Tape and Solo Oboe inaugurated a series of pieces that combined a “live” performer with music from loudspeakers. This work was followed by numerous other compositions: S for S, Electronic Music from 1973 was purely electronic. Finally, in 1988, Dobrowolski wrote Passacaglia für TX, in which the almost 70-year-old composer applied computers. Throughout his life, Dobrowolski made use of various musical genres, he also composed for orchestra. The composer wrote a theoretical study entitled Metodyka nauczania harmonii w szkołach muzycznych II stopnia (Methodology of teaching harmony in secondary music schools) (PWM: Kraków 1967).