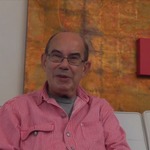 Antonio Dias was born in 1944 in Campina Grande, Paraíba, and lives and works between Rio de Janeiro and Milan. Antonio Dias’ early career, back in the 1960s, consisted of sardonic political vignettes in the form of soft sculptures, drawings, and assemblages belonging to Neo-Figurativism and Brazilian Pop Art. His playful and subversive approach towards eroticism, sex, and political oppression, enabled him to construct a singular and conceptual oeuvre in his art replete with formal elegance interwoven with political issues and poignant critiques relating to the system of art. In 1966, in the midst of the military coup in Brazil, Dias left Brazil for Europe, later settling in Milan in the 1970s. In 1977, following a trip to Nepal, the artist’s work took a new direction. What began as voyage to research different type of paper, developed into a series of collaborations with native papermakers of Barabashi. During the 1980s, Dias turned his attention once again to painting, experimenting with metallic and mineral pigments, such as gold, copper, iron oxide and graphite, mixing them with a variety of binding agents. Most works produced during this time have a metallic sheen and features a vast array of symbols – bones, cross, rectangle, phallus – dating back to the artist’s earlier production.