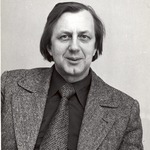 Włodzimierz Kotoński (born 1925) is one of Poland’s leading composers of new music. He began experimenting with electronic transformations of sound in the late 1950s, when attending the International Summer Courses of New Music in Darmstadt. In 1959 Kotoński authored the first autonomous piece for tape composed in Poland: Etiuda konkretna na jedno uderzenie w talerz [Study on one cymbal stroke - musique concréte], as well as many others. His compositions for traditional instruments also frequently use electronic sounds either pre-recorded on tape or produced in concert as “live electronic music”. Kotoński was the first composer who collaborated with the Polish Radio Experimental Studio, which he did regularly since 1958. He also worked at other electronic music centers: the Westdeutscher Rundfunk Studio in Cologne (1966-67), Groupe de Recherches Musicales ORTF in Paris (1970), the Südwestfunk Baden-Baden Studio in Freiburg (SWF - 1979), the Stiftelsen Elektroakustik Musik i Sverige in Stockholm (EMS - 1984), and Groupe de Musique Expérimentale de Bourges (GMEB - 1986). Włodzimierz Kotoński is also the author of the fundamental publication Electronic Music, which appeared in Polish in 1989.