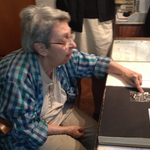 Geta Brătescu was born in Ploieşti, Romania, outside Bucharest, in 1926. During the second half of the 1940s, she studied at the School of Letters and Philosophy of the University of Bucharest and at Bucharest’s Academy of Fine Arts, though for political reasons she was unable to complete her art education until 1971. Through the 1950s and 1960s, she worked primarily as a graphic designer, eventually becoming the artistic director of the art magazine Secolul 20. The most innovative and experimental period of her career began in the 1970s, when she expanded her practice to include performance and recorded performance, photography, photocollage, and textile-based works, all underpinned by a strong conceptual framework. She lives and works in Bucharest.

“The Studio Is Myself”: Interview with Geta Brătescu Read More »