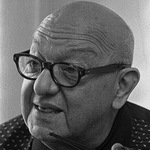 Having received degrees in physical education and law, Jorge Romero Brest decided, after his first trip to Europe to dedicate himself exclusively to the study of art history. By 1945, and in response to the rise of Peronism, he had joined the Socialist Party. In 1939, Romero Brest begun his academic career as professor of art history at the university of La Plata. In 1941 he created the Chair for Training and Artistic Research in the Free College of Higher Studies of Buenos Aires. His four volumes of the Historia de las Artes Plásticas [History of the Plastic Arts], are associated with his teaching duties there. Romero Brest was dismissed from his post in 1947 for his opposition to Peronism. He begun his work as an art critic in 1939 at the socialist daily La Vanguardia (1939-40) and at Argentina Libre 91940-46). Between 1948 and 1955 he published the journal Ver y Estimar with his students and a network of international contributors. This journal played a pivotal role in the development of postwar art criticism and in the dissemination of the idea of modern art in Latin America.

In 1951 he begun to serve on the juries in biennials (São Paulo, Venice, the Biennial of Engraving in Tokyo) and for prizes (including the national and international prizes awarded by the Instituto Torquato Di Tella). In 1955 he was named auditor of the Museo Nacional de Bellas Artes [National Museum of Fine Arts] in Buenos Aires and in 1956 he was appointed Director of that institution. Also that year he was named professor of aesthetics and director of the Institute of Aesthetics at the School of Philosophy and Literature at the University of Buenos Aires, position fro which he would step down in 1961. In 1963 Romero Brest resigned his position at The National Museum of Fine Arts in order to head the newly founded Centro de Artes Visuales [Visual Arts Center] of the Instituto Torquato Di Tella. From there he promoted Argentine art by organizing national and international prizes, and by cocurating the New Art of Argentina, which from 1964 to 1965 traveled to several museums in the United States. Romero Brest was a constant contributor to international journals, among them Art International, Plural, Visión and Eco.

In 1970, after leaving Di Tella Institute, he created the cultural-commercial venture Fuera de Caja [Out of the Box], a center for consumable art, in collaboration with Edgardo Giménez, Raquel Edelman, and Martina Bontempi. In 1989 Romero Brest died in Buenos Aires at the age of eighty-three.