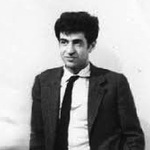 Oscar Masotta was indisputably a central figure in the cultural world of Argentina from the 1950s through the 1970s. In the 1950s he worked at Contorno, the mythic magazine edited by Ismael and David Viñas; it is here that Masotta’s intellectual project begun to take shape. In this magazine that bore the stamp of the socially committed existentialist on every page, he assumed a self-criticism in the face of the positions taken toward Peronism by the cultural world.

In the 1960’s, following a psychological crisis triggered by the death of his father, Masotta focused his attention on experimental artistic productions (Pop and Happenings) and popular culture-particularly that of the comic strip. Masotta’s reading at that time was heading avidly toward Structuralism and especially toward the writings of Claude Lévis Strauss, Roland Barthes and Roman Jacobson. In those years he also gave lectures on Pop art, collected in the book El “pop art.” He also compiled a group of pieces of his own and from artists and critics around him concerning Happenings and media art, collected in the book Happenings. In 1964 Masotta founded the Centro de Estudios Superiores de Arte at the University of Buenos Aires, where he carried out research and led celebrated seminars. He was dismissed during the Onganía dictatorship, at which time he associated himself with the Instituto Torquato Di Tella. There in 1968 he organized the First World Comics Biennale. From 1959 Masotta focused on disseminating the work of the French psychoanalyst Jacques Lacan. His pioneering work was recognized by Jacques-Alain Miller who wrote, “Thanks to the work of an amazing Argentinian, Oscar Masotta, the teachings of Lacan were disseminated throughout the Hispanic world during the seventies.”

Harassed by the growing climate of persecution and political violence, Masotta left Argentina in 1974 for exile in Europe. This was shortly after he had founded the Escuela Freudiana de Buenos Aires, a project he initiated in Spain. Masotta died in Barcelona on September 13, 1979.