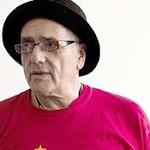 Roberto Jacoby’s first ventures into art were in the field of painting and sculpture, which he subsequently renounced, considering the field to be limited. In July 1966, Jacoby, along with Eduardo Costa and Raúl Escari, wrote the manifesto “Un Arte de los Medios de Comunicación” [“An Art of Communications Media”], in which the mass media is used as an artistic medium. The first work to be produced under this rubric was Non-Happening or Happening que no existió [Happening That Did not Exist.] In this work documentary material was gathered and transmitted to the media about a “happening” that never took place. Subsequently, Jacoby, Costa and Risuleo held the “Primera audición de obras creadas con lenguaje ora [“First Hearing of Works Created with Oral Language”] at the Instituto Torquato Di Tella. At this event they asserted that the magnetic tape was emerging as a means of transmission, so proclaiming the death of the book.

Jacoby participated in Experiencias 68 at the ITDT with the piece Mensaje en el Di Tella [Message in the Di Tella.]The work was composed of a blackboard with a text that proclaimed the union of art and life, a teletype machine that received information from the news agency Agence France Press providing information on the events of May 1968, and a photograph of a black man in the united States marching against racism and the Vietnam War. Also in 1968, Jacoby participated in the creation of the counterinformation action Tucumán Arde [Tucumán Is Burning], held in the General confederation of Workers of the Argentines headquarters in Rosario and Buenos Aires. He was a member of the Group Agitación y Propaganda and conceived of art as a means of intervening in political-social reality.

In 1988 Jacoby initiated the Proyecto “Bola de nieve” [“Snowball”] that sought to create networks of visual artists. That same year he planned and coordinated Chacra99, an arts and technology laboratory.