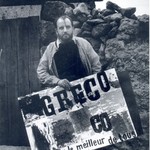 The heralded attempt to relate art with life coalesced in the 1960s in the mythic figure of Alberto Greco. Greco immersed himself as much in the world of poetry as he did in the world of painting. In 1950 he published his book Fiesta. In 1954 the French government awarded Greco a grant to further his studies, and he moved to Paris. A year later he held his first solo exhibition there at Galerie la Roue.

On March 12, 1962, Greco inaugurated the Primera Exposición de Arte Vivo [First Exhibition of Live Art]. Armed with a piece of chalk, he went out into the streets of Paris, picking out and signing people, object, animal and situations. Greco crashed Yves Klein, Cesar, and Arman’s exhibition Antagonisms 2: The Object, wearing a sandwich board whose signs read “Alberto Greco, artwork not in the catalogue.” In 1963 in Rome, Greco, along with Carmelo Bene and Giuseppe Lenti, presented the controversial theater action Cristo 63, a parody of the Passion of Christ. The piece caused uproar, and Greco was accused of blasphemy and had to flee Rome. He moved to Madrid, where he took up painting and drawing again. With Antonio Saura he painted Crucifixiones y asesinatos sobre la muerte [Crucifixions and Assassinations on Death], a large-scale painting about the assassination of John F. Kennedy.

He lived for a while in Piedralaves, Spain. There he produced “Incorporations of People Onto Canvas” that consisted in painting the outlines of people on the white cloth. He also concocted the “Grand Vivo-Dito Anti-Manifesto”-rolls of paper covered with drawings and writings that included descriptions and personal recollections of Cristo 63. In New York, Greco organized a Vivo-Dito Raffle in Grand Central Station, to which artists including possibly Christo, Claes Oldenburg, and Daniel Spoerri, contributed drawings. Greco committed suicide on October 12, 1965. Before dying, he wrote the word “Fin” (“The End”) on his left hand, the last mark he was to make. Many years earlier Greco had stated that his masterwork would be his own suicide.