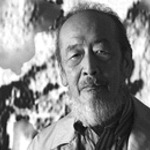 After making a series of works called Vitrine that used layered glass in the 1950s, Yamaguchi joined Jikken Kobo (Experimental Workshop) at the time of the group’s founding. He later created sculptures that incorporated light and movement and showed his work at the Venice Biennale in 1968. Yamaguchi also staged performances and happenings and participated in Fluxus activities. In 1972, he formed the video collective Video Hiroba, producing some of Japan’s first video artworks. The interview with Yamaguchi by the Oral History Archives of Japanese Art is available in English on post.