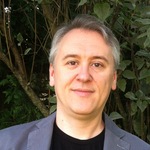 William Marotti is an associate professor in the Department of History at UCLA, teaching modern Japanese history with an emphasis on everyday life and cultural-historical issues. He is also chair of the East Asian Studies M.A. Interdepartmental Degree Program. He received his doctorate in 2001 from the University of Chicago’s Department of East Asian Civilizations and Cultures.

Marotti's Money, Trains and Guillotines: Art and Revolution in 1960s Japan (Duke University Press, 2013) addresses the politics of culture and everyday life in Japan in the early 1960s, explored through a focus on transformations in avant-garde artistic production and performance. Marotti examines the advent of this art-based activism in Japan in the late 1950s and early 1960s and its complex relationship with an internationalized art world, mass culture, domestic protest movements, and evolving forms of state practice, law, and surveillance. He further reflects on the significance of this history for understanding the 1960s as a global moment and the particular role of art and performance in these transformations.

Marotti's current project builds on this study with an expanded consideration of the politics of the 1960s. Portions of this work appeared in the February 2009 issue of the American Historical Review for its forum on "The International 1968." Marotti also has contributed an essay considering the performance and politics of Group Ongaku (the music group) circa 1960 to Tomorrow’s the Question: New Directions in Experimental Music Studies (ed. Benjamin Piekut, Univ. of Michigan Press, forthcoming), a follow-up to his essay in Yasunao Tone: Noise Media Language (Errant Bodies Press, 2007).

Conceptualizing the Politics of Action, "objets," and Failure: Japanese Avant-Garde Practice in the Early 1960s Read More »
Follow
You must be logged into use this feature Login | Register
Print Share
Twitter Mail
ï Participants