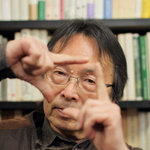 Matsumoto Toshio (born 1932) is a Japanese film director and video artist. After graduating from the University of Tokyo, where he majored in aesthetics, Matsumoto began working at Shinriken Films, a documentary-film production company. His first job as director was to make Ginrin (Silver Ring, 1956), an experimental promotional film. Jikken Kobo members Yamaguchi Katsuro, Kitadai Shōzō, and Takemitsu Tōru were also involved in the production.

At the same time, Matsumoto wrote essays on film theory. In 1963, he published Eizō no hakken: Avangyarudo to dokyumentarii (The Discovery of Film: The Avant-Garde and Documentary), which exerted a strong influence on the Japanese film movement.

In the late ’60s, Matsumoto began to devote himself to experimental films and expanded cinema with Tsuburekakatta migime no tame ni (For the Damaged Right Eye, 1968). In 1969, he directed Bara no sōretsu (Funeral Parade of Roses), a commercial narrative film that exemplified gay culture and the turmoil of the era. In 1970, he served as general director of the Textile Pavilion at the Japan World Exposition held in Osaka, where he presented Space Project Ako, a huge multiprojection video work. Yokoo Tadanori was in charge of the design for the pavilion.