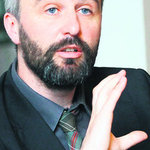 David Crowley is a professor in the School of Humanities at the Royal College of Art, London, where he runs the Critical Writing in Art & Design MA. He has a specialist interest in the art and design histories of Eastern Europe under communist rule. He is the author of various books including National Style and Nation-State. Design in Poland (1992), Warsaw (2003) and editor – with Susan Reid – of three edited volumes: Socialism and Style. Material Culture in Post-war Eastern Europe (2000); Socialist Spaces. Sites of Everyday Life in the Eastern Bloc (2003); and Pleasures in Socialism: Leisure and Luxury in the Eastern Bloc (2010). He writes regularly for the art and design press. Crowley also curates exhibitions (including Cold War Modern at the Victoria and Albert Museum in 2008–9; The Power of Fantasy. Modern and Contemporary Art from Poland at BOZAR, Brussels, 2011; and Sounding the Body Electric. Experimental Art and Music in Eastern Europe at Muzeum Sztuki, Łódź, 2012).

Ultrasounds: Experiments in Music and Art in Eastern Europe in the 1960s and 1970s Read More »