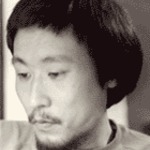 Akiyama (1929–1996) was a Japanese avant-garde composer, musicologist, music and art critic, producer, and poet. He was a founding member of the Jikken Kobo (Experimental Workshop), a group of interdisciplinary avant-garde artists active in Tokyo from the 1950s that included Kitadai Shozo, Hiroyoshi Suzuki, and the composer Toru Takemitsu. The group was created in the context of a postwar Japan struggling with austerity measures and the aftermath of Hiroshima and Nagasaki, but according to Mitsuda Yuri, it was distinct “in that its members were looking to set aside the conflicts and problems of a defeated country and seeking a new, alternative artistic perspective.” In the early part of the 1960s, Akiyama was an active participant in and organizer of events held at the Sogetsu Art Center, and in 1961, he formed part of the New Directions Music Ensemble with pianist Yuji Takahashi, violinist Kenji Kobayashi, and composer Toshi Ichiyanagi. Akiyama’s 1962 Noh Miso, composed as accompaniment for the experimental puppet-theater group Hitomi-za, was followed by the 1966 work Environmental Mechanical Orchestra and 1971's Music for the H Bomb. His criticism focused on Erik Satie, Japanese film music, and Fluxus-related events. He was married to the pianist Aki Takahashi.