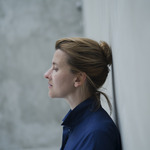 In 2006 the artist graduated from the Sculpture Transplantation Studio, at the Academy of Fine Arts in Poznań, under Mirosław Bałka, where she worked as assistant from 2004 to 2007. In 2013, Krakowiak defended her doctorial dissertation supervised by Mirosław Bałka at the Academy of Fine Arts in Warsaw and was awarded the Ph.D. title. For her dissertation, Krakowiak prepared an exhibition curated by Michał Libera – a sound sculpture for the Zachęta building in Warsaw.

Following her project titled “Making the walls quake as if they were dilating with the secret knowledge of great powers”, Krakowiak received honorable mention at the 2012 edition of the Venice Architecture Biennale; yet again, the project was curated by Michał Libera.

The artist cooperated with Krzysztof Gutfrański and Andrzej Kłosak as part of the Ekspektatywa cycle (Bec Zmiana Foundation) in preparing and publishing instructions on building a space for listening (“Metaphones. Design for the ear.”).

Krakowiak is the author of the “Radio all.FM” project she carried out in several cities all over the world (e.g. Jerusalem,Tallin, Mexico City, Wrocław), in which she used a radio transmitter to “borrow” frequencies from various radio stations and then to broadcast through a hidden transmitter to completely unaware recipients she would walk past.

Krakowiak’s works were presented at numerous solo exhibitions, including one at the Foksal Gallery in Warsaw (a Museums at Night 2011 event; the installation was titled “Who owns air?”) and one at Bunkier Sztuki in Kraków. In 2012, one of her projects was included in a group exhibition titled “Possibility 02: Growth, Shorthand” presented in New Yorkand complemented by the publication of the “Shorthand” artbook discussing the physicality of sound.

In 2013, Krakowiak created the “Chute” (“Zsyp”) installation for the “Turning FACT Inside Out” international exhibition organized, as the title suggests, by the Foundation for Art and Creative Technology (FACT). The installation was located in the main gallery building, which was transformed into industrial, resonating space extracting and amplifying the sounds produced by the building itself, its users and the city that surrounds it, making an impression of sounds literally “falling” onto the visitors.

In September, 2013, she will attend the Göteborg Biennale and later this autumn – the Lisbon Architecture Triennale, where she will be presenting a project created in collaboration with the Architecture Snob. The artist is currently working on a project for New York’s Performa festival curated by Eva Franch Gilabert and produced by the Storefront for Art.

Krakowiak is currently collaborating with Bojan Djordjev in the preparation of an opera to premiere in 2014 in Umea,Sweden. The piece will raise issues revolving around the concept of incomprehensibility of human speech. The libretto will be based on simultaneous interpretation.

“When a stem breaks the water…”: Sounds of the Sogetsu Ikebana school Read More »