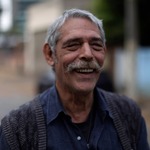 Felipe Ehrenberg (b. Mexico City, June 27, 1943) is a Mexican painter, printmaker, performance artist, writer, teacher, and publisher. He qualified as a printmaker at a very early age, then as a painter and engraver under the tutelage of several masters, among whom the most influential in his life was José Chávez Morado. Although he at first worked with traditional media, he possessed a constantly innovative and critical attitude and experimented with performances, installations, happenings, correspondence, and media art, as well as writing, lecturing, and publishing on such themes as artistic experimentation, cultural promotion, professional management for artists, collective mural painting, and the publishing process. From 1968 to 1972 Ehrenberg lived in England, where, with the architect Martha Hellion and the critic and historian David Mayor, he founded the Beau Geste Press/Libro Acción Libre in Devon to propagate the work of artists involved with the Fluxus movement of the 1970s. He was also instrumental in the rise of many artistic groups, workshops, and small publishing houses, such as Grupo H2O/Talleres de Comunicación, in which tutors gave workshops on editorial work and collective mural painting. He was involved in numerous collective mural projects in Mexico.