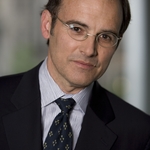 Barry Bergdoll is a Curator of Architecture and Design at The Museum of Modern Art, and professor of modern architectural history at Columbia University. Holding a BA from Columbia University, an MA from King’s College, Cambridge, and a PhD from Columbia University, his broad interests center on modern architectural history with a particular emphasis on France and Germany since 1800. Mr. Bergdoll has organized, curated, and consulted on many landmark exhibitions of 19th- and 20th-century architecture at MoMA, including Building Collections: Recent Acquisitions of Architecture (2010); Rising Currents: Projects for New York’s Waterfront (2010); Bauhaus 1919–1933: Workshops for Modernity (2009); Home Delivery: Fabricating the Modern Dwelling (2008); Lost Vanguard: Soviet Modernist Architecture, 1922–32 (2007); and Mies in Berlin (2001), with Terence Riley. He has also worked on: Breuer in Minnesota (2002), at The Minneapolis Institute of Arts; Les Vaudoyer: Une Dynastie d'Architectes (1991), at the Musée D'Orsay, Paris; and Ste. Geneviève/Pantheon; Symbol of Revolutions (1989), in Paris and at the Canadian Centre for Architecture, Montreal.