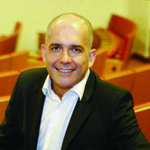 Pedro Gadanho is an architect and writer, and is curator in the Department of Architecture and Design for The Museum of Modern Art. He was the editor-in-chief of Beyond, Short Stories on the Post-Contemporary, a magazine started in 2009 through Sun Architecture, and he is the author of Arquitectura em Público, published through Dafne and recipient of the FAD Prize for Thinking and Criticism in 2012. He taught at the Oporto Faculty of Architecture (2000–2003), and was a co-director of ExperimentaDesign. He has been the curator of international exhibitions such as Space Invaders (2002), for the British Council, London; and Pancho Guedes, An Alternative Modernist, for The Swiss Architecture Museum, Basel. He joined the advisory panel for the British Pavilion at The Venice Architecture Biennale in 2010, and was the co-organizer of the 1st International Conference on Architecture and Fiction: Once Upon a Place-Haunted Houses and Imaginary Cities (2010).

By Pedro Gadanho
Posted on 13 Jan

Re Mark: actually one of the proposals presented in the Uneven Growth exhibition points precisely to a return to rural-inspired practices, albeit within an (almost inevitable) urban environment. The ideas presented by the Atelier d'Architecture Autogérée in collaboration with Istanbul-based Superpool point to the notion of "rurban"as a means to reintroduce local, sustainable economies in monofunctional housing suburbs, which would also foster a more humane urban environment and heightened social relationships. The phenomena of 'rural renewal', with as little impact as it may still have, is thus not forgotten - at least in the context of the curatorial project - but reinterpreted into new directions...

Re Mark: actually one of the proposals presented in the Uneven Growth exhibition points precisely to a return to rural-inspired practices, albeit within an (almost inevitable) urban environment. The ideas presented by the Atelier d'Architecture...

A Call for Change: From Collaboration to Participation Read More »