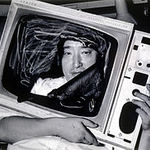 From 1952 to 1956, Paik studied music and aesthetics at the University of Tokyo. In 1956 he moved to the Federal Republic of Germany; he studied music at the Ludwig-Maximilians Universität, Munich, and worked with the composer Karlheinz Stockhausen at Darmstadt, before joining Fluxus, with whom he made performance art, experimental music, and 'anti-films.' His Neo-Dada performances in Cologne during this period included a celebrated encounter with John Cage, during which he formed a lasting relationship with the avant-garde composer by cutting off his tie. He is generally regarded as the first artist to have comprehensively realized the potential of television and video as an artist's medium.

In 1964 Paik moved to New York and began a long performing partnership with cellist Charlotte Moorman. With engineer Shuya Abe, he designed and developed the first color video synthesizer to be used by broadcast television. He became best known, however, for his video installations, for which he accumulated old television sets, sometimes emptying the interiors to accommodate live goldfish, candles or junk assemblages. Alternatively, he modified the circuitry to display lines, circles or wildly reconstituted versions of broadcast signals, or fitted vintage television cabinets with new components to display rapid, dazzling sequences of electronic effects in brash colors. On a smaller scale, he incorporated miniature television screens into everything from brassières to cellos or made unexpectedly powerful works in which a statue of Buddha appears to contemplate its own video image.

While forging a reputation as a visionary, jester and chat-show celebrity, he embarked from 1977 on an increasingly ambitious series of international satellite broadcast projects, logistically impressive but banal in content. Some critics felt the minimal, 'day-glo' qualities of the early work, particularly inspired by Zen Buddhism, were obscured by the complexity of his later activities, but Paik was apparently not concerned with pleasing critics: 'I am a poor man from a poor country,' he said, 'so I have to be entertaining all the time.' Paik was also made a professor at the Staatliche Kunstakademie Düsseldorf, Hochschule für Bildende Künste.