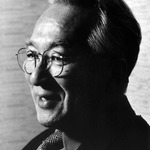 Yuasa studied medicine at Keio University, Tokyo (1949-51), but abandoned this course for composition. From 1951 to 1957 he was active as a member of the Jikken Kobo (Experimental Workshop), together with Takemitsu Toru and others. His compositional attitude is quite unconventional, which may be due in part to his medicinal interest in auditory physiology as well as his experience with nō music; he is particularly skilled in distributing sounds of various tone-colors in a 'space' without attempting any logical formal arrangement. He was one of the first Japanese composers to take an interest in musique concrète. In 1964 he began to work frequently at NHK's Electronic Music Studio, producing such pieces as Comet Ikeya and Ai to shura ('Love and Asura'), both of which won Italia prizes, and Mandala, which won the Grand Prize at the Japanese Government Arts Festival. In 1968 he received a Japan Society Fellowship, which enabled him to make a lecture tour of the USA and Europe. In 1981 he was invited to be professor of composition at the University of California in San Diego, and in the following years became a professor at Nihon University and also a guest professor at the Tokyo College of Music.