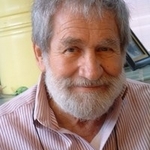 From 1945 to 1949 Kaprow was at New York University as an art major, and from 1947 to 1948 he also studied painting with Hans Hofmann at the Hans Hofmann School of Fine Arts in New York. On graduation from New York University Kaprow began working for an MA in Philosophy, but left the following year to study for an MA in Art History at Columbia University, New York, under Meyer Schapiro. On completing his thesis in 1952, he began to devote himself to his own work and co-founded the Hansa Gallery in New York with other former students of Hofmann, holding his first one-man exhibition there in 1953. From 1953 to 1961 he taught Art History at Rutgers University, New Brunswick, NJ.

From 1957 to 1957 Kaprow studied musical composition at the New School for Social Research in New York under John Cage, whose elevation of chance as a working tool was influential on his art. From this time he ceased to exhibit as a painter or sculptor in the traditional sense, becoming more interested in the conceptual and philosophical framework of art and turning instead to sculptural installations that he termed "Environments" and "Happenings," an influential form of performance art. Throughout the 1960s Kaprow developed Happenings and Environments. After 1968 when Kaprow adopted the term "Activity" in place of "Happening," his work became more intimate. Activities were less strictly governed by rules and consequently less theatrical. The Activities were simply scripted so that they could be acted out by anyone.