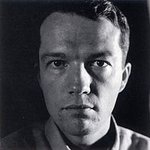 George Brecht studied at the Philadelphia College of Pharmacy and Science from 1946 to 1950 and in 1958-9 attended the class in Experimental Composition given by John Cage at the New School for Social Research in New York. Like fellow students soon associated with the Performance Art events known as "Happenings" and with the emergence of the Fluxus movement, Brecht was influenced by Cage's dissolution of boundaries between art, poetry, music, literature and theatre and by the role of chance and play in the creative act.

In 1965 Brecht and Robert Filliou founded La Cédille Qui Sourit in Villefrance-sur-Mer. Later he created a number of inventions, some of them patented under the name of Brecht and McDiarmid Research Associates, that were often still imbued with the playful spirit of his art. From 1972 he lived and worked in Cologne.