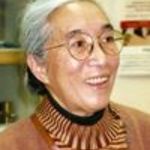 Takako Saito was born in 1929, in Sabae-Shi, Fukui, Japan. From 1963 to 1968, she lived in New York where she came to know George Maciunas and participated with Multiples in the Fluxus movement that had emerged in 1962. From 1965 to 1968, she was a student at the Brooklyn Museum Art School and then she studied at the Art Student League, New York. From 1979 to 1983, Saito taught at the University of Essen.

Participating in numerous Fluxus activities, Saito appeared in public with her own performances from 1971 on. She specifically focused on the everyday world of things and materials: natural matters such as shells, onion skins, orange peels or stone and materials such as wood, paper, plastics or rubber foam. With small objects that often seem playful (chess games, toy objects) and that keep suggesting new, individual variants of games beyond structural regulations, Saito sought to immediately address and include viewer and reader. She wanted to turn them into agents, even into artists. Since the early 1970s, Saito's works have been shown at exhibitions, especially in Japan, in the U.S., and in Germany. Since 1978, Saito has lived and worked in Düsseldorf.