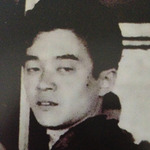 Yoshiaki Tōno (1930–2005) was part of a young group of critics that debuted in the 1950s. They followed a shift in art criticism begun by established intellectuals such as literary critic Hanada Kiyoteru (1909–1974) and poet Takiguchi Shūzō (1903–1979) that focused on a socially oriented and more theoretically informed criticism. Later, Yoshiaki was considered, along with Hariu Ichirō and Nakahara Yūsuke, one of the “three greats” of Japanese art criticism. He quickly gained an influential voice, publishing in newly launched art magazines such as Bijutsu Techō (Art Notebook, 1948–), Geijutsu Shinchō (New Trends in Art, 1950–), and Bijutsu Hihyō (Art Criticism, 1952–57).

In 1957, Yoshiaki was part of a group that formed the Kiroku Geijutsu no Kai (Society of the Documentary Arts). The manifesto they issued called for transdisciplinary practices and proclaimed that the “documentary spirit militates against the hardening of art by destroying aesthetic conventions to constantly open up new artistic territory and to revolutionize, reorganize, and expand the very strategy of art.” As demonstrated by this group, the Japanese art world during this period was driven by the desire to maintain a fluid network of associations that would continually redefine the premise of art and reality and would stave off the static, monumental aesthetics of wartime Japan.

Beginning in 1958, Yoshiaki traveled often to the United States, and his articles on contemporary American art were published in many Japanese art journals. In 1959, he met Jasper Johns and Robert Rauschenberg and later chaired a panel in Japan with Rauschenberg’s participation. Thus artists in Tokyo gained a sense of engagement with the international art world, of which New York (and no longer Paris) was deemed the center. Grants and invitations from the Rockefeller Foundation and the Japan Society made the prospect of travel to the United States appealing and feasible for these anti-art proponents.

Yoshiaki’s art criticism was associated with artists who attempted to destabilize the materiality, form, and ethos of art by engaging with performative aspects of the body rather than its representation in the figurative tradition. In 1960, Yoshiaki dubbed the tendency Han-geijutsu (anti-art), and the term became the subject of intense critical debates for several years. Tōno further aided in the construction of the new anti-art generation in 1964, when he organized an exhibition titled  Young Seven, which included Kudō, Arakawa Shūsaku, Kikuhata Mokuma, Tateishi Kōichi, and Miki Tomio.

In1966, Yoshiaki curated Color and Space/Shikisai to Kūkan at Minami Gallery, with Isozaki Arata, Miki Tomio, Tanaka Shintarō, Yamaguchi Katsuhiro, and Sam Francis; the works were based on the exploration of a new relationship between art and the viewer. Yoshaki acted as Japan’s commissioner for the Venice Biennale in 1970, presenting the work of artists Arakawa Shūsaku and Sekine Nobuo. In the same year, he curated 1970-nen 8-gatsu: Gendai bijutsu no ichi danmen (Aspects of New Japanese Art, National Museum of Modern Art, Tokyo) with thirteen young artists, including Kawaguchi Tatsuo, Koshimizu Susumu, Narita Katsuhiko, Lee Ufan, Takamatsu Jirō, and Yoshida Katsurō.