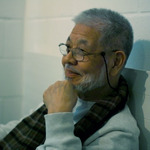 Yasunao Tone (born 1935) is a Japanese-American artist, writer, theorist, and composer. According to critic Alan Cummings, he is “part of a whole generation of post-war iconoclasts who followed in the wake of John Cage's discovery of indeterminacy, determined to shake music and art out of their enslavement to the high art, romanticist ideals of the 19th century.” He co-founded Group Ongaku (Music group) in the early 1960s and was part of the Fluxus group in New York, Downtown improvisers, and the European electronica experimentalists. An outstanding experimentalist, Yasunao coined the term "paramedia art" to describe his work, and his artistic inventions include prepared CD and interventions with an MP3 system. Honors include the Ars Electronica Golden Nica award and the Foundation for Contemporary Arts award in music.