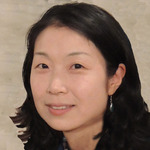 Midori Yoshimoto is associate professor of art history and gallery director at New Jersey City University with extensive curatorial background. While earning her Ph.D. at Rutgers University between 1996 and 2002, she served as Assistant Curator at the Jane Voorhees Zimmerli Art Museum, realizing several exhibitions, which travelled to Japan. As an independent curator, she has organized Do-It-Yourself Fluxus (Art Interactive, Cambridge, MA, 2003) and New Tale of Our Age, (The Visual Art Center of New Jersey, Summit, 2009). Yoshimoto has also served as a lecturer at the Museum of Modern Art, New York since 2004.