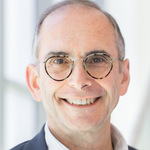 Since 1996, Jay A. Levenson has been the Director of the International Program at The Museum of Modern Art, where he coordinates the Museum’s relations with institutions in other countries. Prior to that he was Deputy Director for Program Administration at the Solomon R. Guggenheim Museum, where he helped prepare such major exhibitions as Africa: The Art of a Continent and China: 5000 Years. He has served as guest curator for a number of exhibitions, including Circa 1492: Art in the Age of Exploration (1991) and The Age of the Baroque in Portugal (1993) for the National Gallery of Art, and Encompassing the Globe: Portugal and the World in the 16th and 17th Centuries (2007) for the Arthur M. Sackler Gallery, Washington, which was also presented at the Palais des Beaux-Arts in Brussels and the Museu Nacional de Arte Antiga in Lisbon. A graduate of Yale College and Yale Law School and awarded a PhD in art history by the Institute of Fine Arts of New York University, he has held positions as a curator, museum administrator, and attorney.

The Archival Impulse: Collecting and Conserving the Moving Image in Asia Read More »