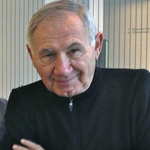 Born in Split in 1936, Jesa Denegri has played a central role in historicizing and theorizing the experimental art from the former Yugoslavia. With his first writings published in 1965, he observed and influenced generation of Yugoslav artists. His theory of "the other line", in which he developed a genealogy of the neo-avant-garde that deviated from canonic models, became very influential in the region. Denegri holds a PhD from the Faculty of Philosophy in Belgrade. He was a curator at the Museum of Contemporary Art (MSU) in Belgrade between 1965 and 1989, and a senior counselor there until 1991. After working at the museum, he held the position of Professor of History and Theory of Modern Art at the University of Belgrade (1990-2005). Jesa Denegri is a member of AICA, of the Association of Art Historians of Serbia and the Association of Art Critics of Serbia. He has also been a member of the editorial boards of the magazines “Art”, “Architecture/Urbanism”, “Spot” and was editor-in-chief of the magazine for the contemporary art “Moment", published in the 1990s. Denegri has authored many articles and books on art of the 20th century, published in (ex-)Yugoslavia and internationally. He curated the Yugoslav contribution to the Paris Biennial (1971, 1976, 1983) and the Venice Biennial (1976, 1982). Denegri is currently working on a book about the Gorgona group.