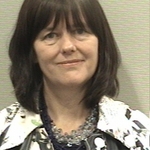 Juliet Kinchin joined The Museum of Modern Art in 2008 as Curator in the Department of Architecture and Design, focusing on the history of modern design. Her recent MoMA exhibitions and related publications include: Century of the Child: Growing by Design, 1900–2000 (2012); Counter Space: Design and the Modern Kitchen (2010–11); Postwar Polish Posters (2009); and Seeing Red: Hungarian Revolutionary Posters (2011). She is currently an honorary senior research fellow at The University of Glasgow where she was formerly a senior lecturer in the Department of the History of Art, and the founding director of the graduate program in decorative arts and design history. She has also held faculty positions in the history of art and design at The Glasgow School of Art, and at The Bard Graduate Center for Studies in Design, New York. Additionally, she has worked as a curator in Glasgow-based museums and art galleries, as well as London's Victoria and Albert Museum. Her recent publications include: "Caught in the Ferris Wheel of History: Trianon Monuments in Hungary" (2011) and “Hungarian Pottery, Politics and Identity: Re-presenting the Ceramic Art of Margit Kovåcs 1902–77” (2009), in The Journal of Modern Craft; “In the Eye of the Storm: Lili Mårkus and Stories of Hungarian Craft, Design and Architecture 1930–1960” (2008) and “Performance and the Reflected Self: Modern Stagings of Domestic Space, 1860–1914” (2008), in Studies in the Decorative Arts; and “Hungary, Shaping a National Consciousness” (2004), in The Arts and Crafts Movement in Europe and America.

Cold War Modern: Raymond Loewy in the US and the USSR Read More »