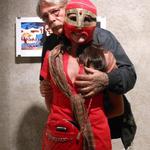 Felipe Ehrenberg (Mexico City, ’43), draughtsman, painter, performance and installation artist. A pioneer in artists’ books, he lived in England in the early seventies, where he co-founded the Beau Geste Press and published his work and that of a number of visual poets, conceptualists, neo-dadaists and experimental artists, most of whom were linked to the Fluxus movement. A selected anthology of his texts, titled Vidrios rotos y el ojo que los ve (Broken glass and the eye that looks at it)", was published in 1996, in Mexico. Ehrenberg has been distinguished with several awards, foremost the Roque Dalton Medal (1987) for his field work during the aftermath of the earthquake in El Salvador; a John Simon Guggenheim Fellowship (1976), a Fulbright Lecturing Award, and Mexico's CNCA Grant for Mid-career Artists (1991). He was Mexico’s cultural attaché in Brazil (2001-2006) and is presently based in São Paulo, Brazil.

My Archive as Artwork

By Felipe Ehrenberg
Posted on 6 Aug

This text is, of course, pre Assange, Snowden & Cy, having being written sometime in 2003. On re-reading it, though, I was struck by two phrases of mine. The second one is, I think, worthy of close attention:

I'm afraid there's no turning back now, though...

This text is, of course, pre Assange, Snowden & Cy, having being written sometime in 2003. On re-reading it, though, I was struck by two phrases of mine. The second one is, I think, worthy of close attention:

On Today's perceptions of Yesterday's conceptions

By Felipe Ehrenberg
Posted on 23 May

I'm flummoxed and flabbergasted by the amount of texts appearing here and there on mail art: definitely bewildered by the whys and wherefore offered by some thinkers, mostly quite young people; astounded by some of the interpretations proffered, surely, with good, even best intentions.

What I'm trying to say is that I can't remember any of us producing mail art self consciously, in search of someone to interpret what we were creating (if in fact, any one of us considered the creativity that went into making-sending-waiting-for-reponse equal to that of producing a painting, an etching, a sculpture).

Unlike most of (today's) contemporary artists, who strive more and more to attract the attention of curators and art writers and the collectors (buyers) who follow their lead, while caring less and less for neighbors, family or friends, the stuff we manu--factured and sent out was almost invariably a one-to-one gesture, a one-to-one dialogue, be it with a friend (beautiful word), be it to make a new friend. I doubt any of us conceived or perceived our shipments as art. Many things sent by mail contained bits and pieces of other dialogues, visual and literary puns, private jokes, elements in a continuum of friendships and complicities that may be hard if not impossible to deciphre 20-30-40 years later by a young thinker whose whole professional upbringing depends on the science fiction reality they live today (as compared to what we lived) and the incredibly complex and laberynthical nature of contemporary art criticism, a plethora of googled quotes by cultural philosophers from the Northern Hemisphere. None of this type of thinking underlies Clemente Padin's 'ovums' or Marcos Kurtycz' bombs or my mail puzzles to be pieced together or Robin Crozier's mail barrages or Klaus Groh's whimsies. Mail art simply did not exist as a legit niche in art thinking…

Unlike most of the artists I knew and met in those years, I happen by chance to be a compulsive saver, storer, keeper… My files are now spread out between the UK (Tate), the US (Stanford), Mexico City (MUAC and in storage) and São Paulo (in studio). While I kept most of what I received, I very much doubt anyone kept what I sent them.

Just a year ago, in a totally retro and absolutely ludic impulse, I decided to take up old fashioned mail art again. My addressee was my friend Enrique Guerrero, who has a really nice little gallery in Mexico City.

Shipping costs and insurance and brokers' fees being so high, I decided to send him 24 collages by snail mail (Filipéndulas: cart as a México). To my surprise and far beyond Enrique's promotional capacities, the show garnered an incredible amount of attention from the non specially media, papers, TV, radio and the feedback from normal people was fantastic… And not surprisingly, no attention whatsoever from professional art writers. And Enrique only sold 3 pieces... Which proves my point (of there be a point at all).

BTW: I DID enjoy Mara Polgovsky's ponderation; so apropiate for her to state "This will to flee, to escape, to flow, is the most commonly evoked characteristic of mail art expressions in Latin America."