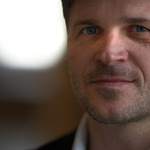 Since 2006, Jarosław Suchan has served as director of the Muzeum Sztuki in Lodz. Previously, he served as the director of the Bunkier Sztuki Gallery, Cracow (1999–2002), and as deputy director and chief curator of the Centre for Contemporary Art Ujazdowski Castle in Warsaw (2002–06). As a curator or co-curator, he has organized Cezary Bodzianowski. This Place Is Called the Hole (2012); Neoplastic Room. Open Composition (2010); Pole, Jew, Artist. Identity and Avant-Garde (2009); Performer. Grotowski and Performance Art (2009); Katarzyna Kobro/Lygia Clark (2008); So ist es und anders (2008); At the Very Center of Attention (2005–06); Tadeusz Kantor. Interior of Imagination (2005); Thomas Ruff (2003); 4 rooms. Gallery as a discursive space (2001); and Tadeusz Kantor. Impossible (2000), among others. He is the author of many texts about modern and contemporary art and editor or co-editor of the books Władysław Strzemiński. Czytelność obrazów (Władysław Strzemiński: Readability of Images) (2012); Polak, Żyd, artysta. Tożsamość a awangarda (Pole, Jew, Artist: Identity and Avant-Garde) (2010); Tadeusz Kantor. Interior of Imagination (2005); and Tadeusz Kantor. Impossible (2000). Suchan is a member of the Polish sections of AICA (International Association of Art Critics), the Polish National Committee of ICOM (International Council of Museums), and CIMAM (International Committee for Museums and Collections of Modern Art). He is on the advisory committee of the yearly World Art. He is also a laureate of the 2009 Prize of Minister of Culture and National Heritage in Poland.