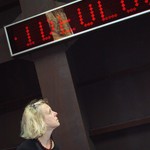 Barbara London is Associate Curator in the Department of Media and Performance Art at The Museum of Modern Art. She joined the Museum in the early 1970s and founded the video exhibition and collection programs. Among London’s recent work is Through the Weeping Glass with the Quay Brothers at the Mutter Museum in Philadelphia. At MoMA, she organized the exhibitions Looking at Music 3.0 (2011), Looking at Music: Side 2 (2010), Looking at Music (2008), Automatic Update (2007), River of Crime (2006), Stillness: Michael Snow and Sam Taylor-Wood (2005), Anime!! (2005), Music and Media (2004), TimeStream (2001); a series of web projects undertaken in China, Russia, and Japan; Video Spaces: Eight Installations (1995); and Projects exhibitions with Nam June Paik, Shigeko Kubota, Peter Campus, Thierry Kuntzel, Steve McQueen, and Song Dong, among others. London is organizing the upcoming exhibition Soundings (August 2013). She has also written and lectured widely.