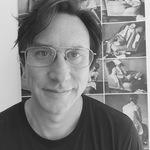 David Senior is the Chief of Library and Archives at San Francisco Museum of Modern Art (SFMOMA). He was formerly the Senior Bibliographer at the Museum of Modern Art Library, where he manages collection development, including the library’s artists’ books collection. Senior lectures often on the history of artists' publications and contemporary art and design publishing. He also curates exhibitions of MoMA Library materials including: THE ELECTRO-LIBRARY (2016), Ray Johnson Designs (2014), Please Come to the Show (2013), Millennium Magazines (2012), Access to Tools: Publications from the Whole Earth Catalog, 1968–74 (2011). His most recent exhibition Back in Time with Time-Based Works: Artists’ Books at Franklin Furnace, 1976–1980, celebrated the fortieth anniversary of the Franklin Furnace Artist Book Archive. Please Come to the Show, a book documenting his exhibition of artists' invitations and show flyers from the MoMA Library, was published by Occasional Papers in 2014. His writing has appeared in Frieze, Dot Dot Dot, Bulletins of the Serving Library, ART PAPERS, and C Magazine. He organizes a regular program of events for Printed Matter's New York Art Book Fair and the LA Art Book Fair called the Classroom. Senior edited an artist book series through Printed Matter and the NYABF from 2008-2014, which included publications with Dexter Sinister, David Horvitz, Emily Roysdon, Aaron Flint Jamison, James Hoff and Eve Fowler. He serves on the advisory committees of Printed Matter, Art Metropole and Art Resources Transfer and the board of directors of Primary Information and Yale Union.

By David Senior
Posted on 28 May

In Sven Spieker’s contribution to this discussion, he noted the really wonderful invitation from 1962 that was dispatched by the artist group Gorgona. It simply stated, “You Are Invited” - or as translated elsewhere, “Please Attend.” There was no other discerning markings or information that would lead you anywhere - just that one was invited, generally.

In the recent past, I have been doing some research on special invitation cards and event flyers in the ephemera files in the MoMA Library. This research was leading up to a small exhibition of these materials - dating from c. 1960-1980 - that has just opened in the Cullman Research and Education Building at MoMA. The working title for this show had been Please Attend. Even though we do not have a copy of the Gorgona invite, I wanted to pay homage to the Zagreb group’s gesture though this show title. In fact, a perfect, little show would simply be that one Gorgona invite in the center of an otherwise empty room. Alas, a recent gallery show in Berlin of Gorgona material had the same name, so I decided not to be redundant and I finally called the MoMA show, Please Come to the Show.

During this research. the working premise was to collect examples of artists' invitations - gestures that used and manipulated the convention of the invitation to produce, refine, extend, or obfuscate works. Just as artists have used other tools in strange and unexpected ways, the tool of the announcement card or exhibition advertisement has been appropriated and played with to various ends. I can quickly list a few examples from my recent foray into MoMA Library's artist’s files. Please follow the link to the show to see more illustrated examples of these materials and a checklist of invitations included in the show. 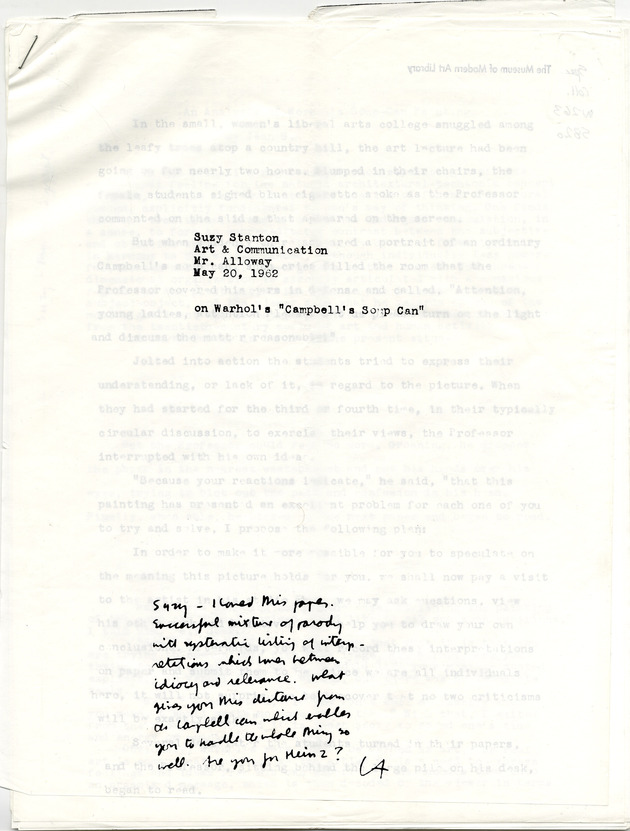 One favorite in the exhibition is Suzy Stanton’s term paper that she wrote in Lawrence Alloway’s class at Bennington College in 1962. Andy Warhol's 1962 Campbell's Soup Cans were the source of much debate among Alloway's students at Bennington that year. One student, Ms. Stanton, wrote a term paper titled "On Warhol's Campbell's Soup Can." The paper creates the fictional scenario of a studio visit with Warhol, including hypothetical conversations between 16 students and Warhol about his work and his relationship with soup. Alloway sent the paper to Warhol, who, according to Alloway, "was enthusiastic about it and reproduced it photostatically for use as an exhibition announcement put out by the Stable Gallery." The only identification of the student paper as an exhibition announcement is a gallery stamp with the dates of the show and Warhol's name on the back of the last page. 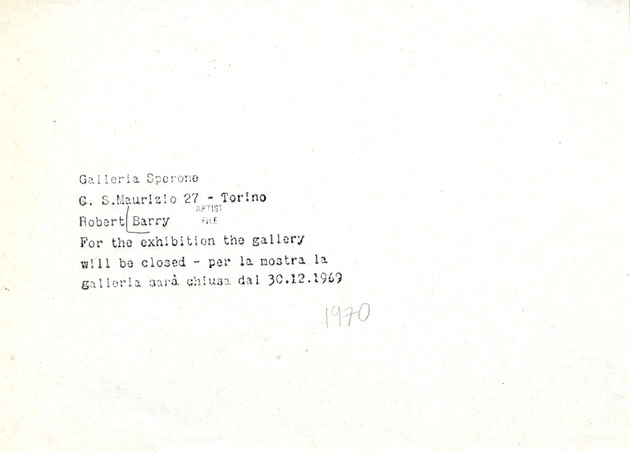 Second, two Robert Barry invitations are parts of works in which the announcement was the decisive element in the work. For Closed Gallery, the announcement communicates that for the run of the exhibition the gallery will be closed. This was staged three times through the post in 1969, through an announcement by the Los Angeles gallery, Eugenia Butler, and through these announcements by Art & Project and Galleria Sperone. The second work, Invitation piece, involved the coordination of eight galleries: Paul Maenz, Art & Project, Jack Wendler Gallery, Leo Castelli, Yvon Lambert, galerie MTL, Galerie Toselli, and Galleria Sperone. In each invitation, the gallery invited the audience to attend a Robert Barry show at another gallery. In the example here, Art & Projects invites you to Jack Wendler Gallery. The piece extended over the course of the 1972–73 gallery season. 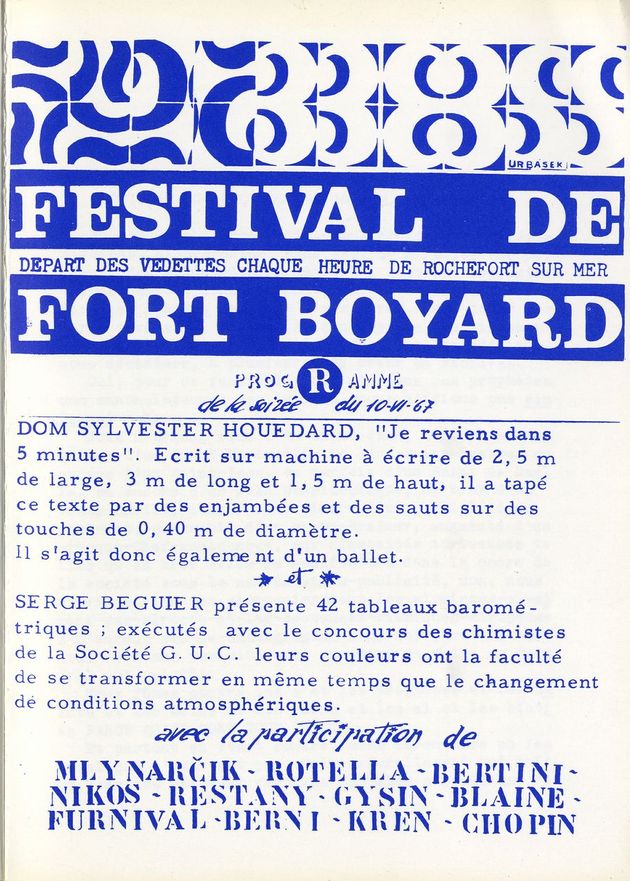 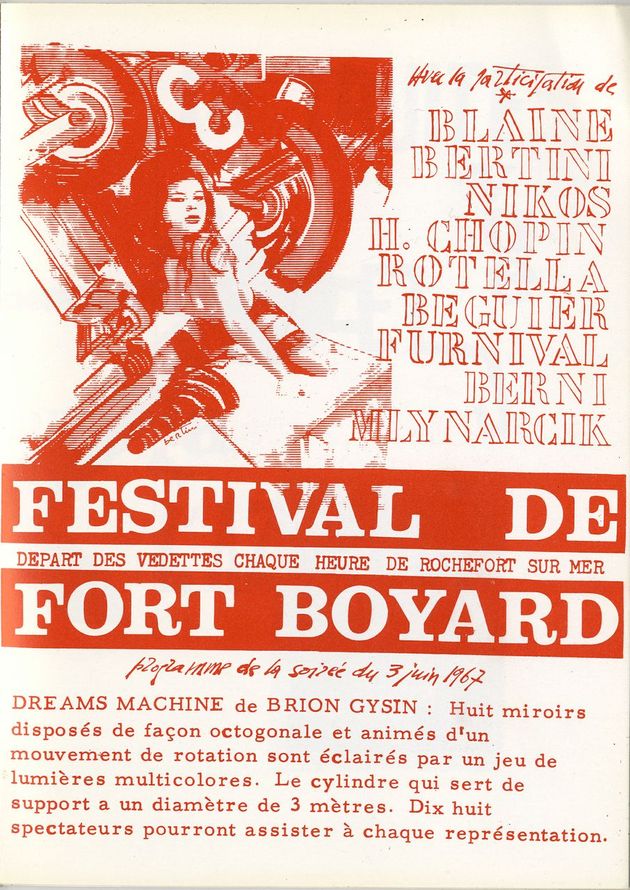 Another anecdote that I came across was the story of the fictional Festival de Fort Boyard. A description of the posters for the “festival” can be found in Anne Moeglin-Delcroix’s essay in Steven Leiber’s publication Extra Art : A Survey of Artists’ Ephemera, 1960-1999. The paper performance was created by Henri Chopin and Gianni Bertini in 1967. The posters were stuck up around Paris throughout June of 1967 and they listed an elaborate range of activities by artists such as Ian Hamilton Finlay, William Burroughs and Brion Gysin, Mimmo Rotella and Chopin. Visitors were invited to Fort Boyard - an old, rather forbidding French prison that was located on a island off the French coast. The advertised events were never going to take place and the posters were the event for the “organizers”. A publication was subsequently made in 1970 that reproduced the posters that had been created. In this book, Chopin recounted of the participants, “We were...living beings who placed creation in non-creation above all else...” For some images of the book and some more description, follow this link to a colleague from the Beinecke Library at Yale’s attempt to decipher this little book.

In Sven Spieker’s contribution to this discussion, he noted the really wonderful invitation from 1962 that was dispatched by the artist group Gorgona. It simply stated, “You Are Invited” - or as translated elsewhere, “Please Attend.” There was no...