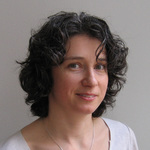 Masha Chlenova is an art historian and curator specializing in modern art with a focus on the Russian avant-garde. She holds a Ph.D. from Columbia University. Masha worked in curatorial departments at the Metropolitan Museum, the Guggenheim, and The Museum of Modern Art, where she worked with Leah Dickerman on a major survey of abstraction entitled Inventing Abstraction, 1910-1925. Recently she served as project-based curator at the Stedelijk Museum in Amsterdam. In New York she recently organized the exhibitions Grounding Vision: Waclaw Szpakowski at Miguel Abreu Gallery and Russian Revolution: A Contested Legacy at the International Print Center New York. Chlenova’s writing has appeared in the journal October, in edited books, and in exhibition catalogs published by The Guggenheim, MoMA, Tate Modern, Royal Academy of Arts in London and Centre Pompidou among others. She currently teaches art history at Lang College, New School University.