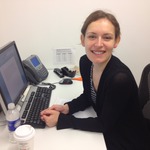 Paulina Pobocha is an Associate Curator in the Department of Painting and Sculpture at The Museum of Modern Art, New York, where she has worked since 2008. At MoMA she has organized The Long Run (co-organized with Cara Manes), 2017; Rachel Harrison: Perth Amboy, 2016; Projects 103: Thea Djordjadze, 2016 (at MoMA PS1); Robert Gober: The Heart Is Not a Metaphor, 2013 (co-organized with Ann Temkin); Claes Oldenburg: The Street and The Store, 2013 (co-organized with Ann Temkin and MUMOK, Vienna). Additionally, she is actively engaged in museum acquisitions, collection displays, and the 2019 expansion project. Prior to joining the curatorial staff of The Museum of Modern Art, Pobocha was a Joan Tisch Teaching Fellow at the Whitney Museum of American Art, New York where she lectured on a broad range of subjects in contemporary and modern art. Her writing has appeared in a variety of publications and exhibition catalogues. Pobocha received her B.A. from the Johns Hopkins University in 2000 and her M. Phil. in 2005 from the Institute of Fine Arts, New York University.