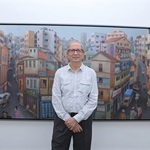 Sudhir Patwardhan (b. 1949, India) is a figurative and landscape painter steeped in urban realism. He works primarily in drawing and painting and has been exhibited in India and abroad over the past four decades. Some participations include Kochi Muziris Biennale, 2014-2015; Social Fabric at INIVA, London and IFA-Galerie Stuttgart, Germany, 2015; Midnight to the Boom, Painting in India after Independence, Peabody Essex Museum, Salem, Massachusetts, 2013; and Modernist Art from India, Rubin Museum, New York. 2012. The 2018 retrospective of his works held at Roopankar Museum Bharat Bhavan, Bhopal, India, will be followed by a more comprehensive exhibition at the National Gallery of Modern Art, Mumbai, in December 2019. Patwardhan lives and works in Thane, a city near Mumbai, India.