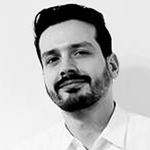 Evangelos Kotsioris is a New York-based architectural historian, educator and architect whose research focuses on the intersections of architecture with science, technology and media. He is currently a Curatorial Assistant in the Department of Architecture at the Museum of Modern Art in New York, where he oversees the development of MoMA’s first permanent collection galleries of architecture covering the period 1900–1975, among other projects. He was the 2016–17 Emerging Curator at the Canadian Centre for Architecture in Montreal, where he organized the exhibition Lab Cult: An unorthodox history of interchanges between science and architecture. In 2015–16 he was the Assistant Curator of the 3rd Istanbul Biennial, Are We Human?, curated by Beatriz Colomina and Mark Wigley.

Kotsioris holds an MArch II from Harvard Graduate School of Design and his doctoral research at Princeton School of Architecture has received the Carter Manny Citation for Special Recognition by the Graham Foundation in Chicago. Most recently he has presented his research in conferences of the Society of Architectural Historians, the Society for the History of Technology, the Association for Slavic, East European, and Eurasian Studies, and the International Federation of Information Processing. Kotsioris has been a travelling fellow of the Society of Architectural Historians and a graduate fellow of the Princeton Institute for International and Regional Studies. He has taught architecture seminars and studios at Harvard GSD, Princeton SoA, the Boston Architectural Center and The Cooper Union. His writing has appeared in Perspecta, New Geographies, The Architectural Review, Volume, Manifest, Conditions, On Site and elsewhere.

Unpacking Barr’s Library: The Paper Trail from the Bauhaus to VKhUTEMAS Read More »