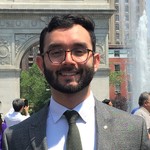 Julián Sánchez González is a Ph.D. Student in Art History at Columbia University. He holds an M.A. in Art History from NYU's Institute of Fine Arts, and a double B.A. in History and Political Science from the Universidad de los Andes in Bogotá. His broader academic interests investigate the relationship between self-taught and trained art in the context of the Black Atlantic Diaspora and the development of Global Modernisms during the second half of the twentieth century. His current research project analyzes the influence of alternative spiritual practices in art production from 1970s Latin America and the Caribbean. Previously, Mr. Sánchez worked with the Museos de Arte y Numismática del Banco de la República in Bogotá and the Art Museum of the Americas – Organization of American States in Washington, D.C. His writing has been published by the Museum of Modern Art (MoMA), the Patricia Phelps de Cisneros Collection, Oxford Art Online, and the Universidad Jorge Tadeo Lozano in Bogotá. His work has been generously supported by the Fulbright Program, the Ministerio de Cultura de Colombia, the Fundación COLFUTURO, and the Andrew W. Mellon Foundation.