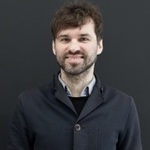 Sebastian Cichocki is a curator, writer, and art critic. He is chief curator of the Museum of Modern Art in Warsaw and curator of the Sculpture Park in the Warsaw district of Bródno. In the years 2005 to 2008 he was program director of the Contemporary Art Centre in Bytom. Select exhibitions curated by Cichocki include the Polish pavilions at the 52nd and 54th Venice Biennales, with Monika Sosnowska (1:1) and Yael Bartana (... and Europe will Be Stunned) respectively, the latter project co-curated with Galit Eilat, Making Use: Life in Postartistic Times, Museum of Modern Art in Warsaw (2016), Rainbow in the Dark. Part 2: On the Joy and Torment of Faith, Konstmuseum Malmo (2015), Rainbow in the Dark, SALT Galata, Istanbul (2014), Zofia Rydet, Record 1978-1990, Museum of Modern Art in Warsaw (2015), Procedures for the Head, Kunsthalle Bratislava, Slovakia (2015), New National Art, Museum of Modern Art in Warsaw (2012), Early Years, KW Institute for Contemporary Art, Berlin (2010), Raqs Media Collective, The Capital of Accumulation, Museum of Modern Art in Warsaw (2010), Oskar Hansen. Process and Art 1966-2005, Museum of Modern Art in Skopje, Macedonia. Sebastian Cichocki has managed the Sculpture Park in Brodno, a long-term public art programme initiated in 2009 with the artist Paweł Althamer (featuring projects by Olafur Eliasson, Jens Haaning, Monika Sosnowska, Rirkrit Tiravanija, Ai Weiwei and others). He has produced a number of experimental exhibitions in the form of books, as well as residency programs and staged lectures. Cichocki is an author and co-author of several books on art including A Cookbook for Political Imagination (2011), The Future of Art Criticism as Pure Fiction (2011), Earth Works! (2014), and a popular children’s book on contemporary art “S.Z.T.U.K.A” (A.R.T.). Recently he participated in the Samdani Art Foundation seminar series leading his own seminar discussing "Art in Postartistic (and Postdemocratic) Times" (2017).