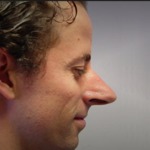 Lucas Ospina is a Colombian artist, critic, and curator. Born in 1971, he is currently an associate professor in the Department of Art at Universidad de los Andes, Bogotá, where he also received his B.A. in 1995. His graduate work was completed at the Tyler School of Art, Temple University, Philadelphia, where he earned an MFA in Sculpture in 2003. His practice, predominantly in drawing, constitutes a poignant critique of Colombian society, one that successfully dialogues with Ospina’s production as a cultural critic. He is a prolific writer, and a frequent op-ed contributor to major Colombian news outlets. In collaboration with Bernardo Ortiz, Francois Bucher, and Carolina Sanín, he created the fictional artist Pedro Manrique Figueroa, precursor of collage in Colombia. Manrique, who was believed to be real for a considerable amount of time, has inspired multiple exhibitions, publications, and acclaimed documentary, Un tigre de papel, by filmmaker Luis Ospina. Despite the collaborative origins of Manrique, Lucas has alone crafted the more recent variations of Manrique and his works. His tenure as a professor has significantly influenced a number of artist and curators, and he remains one of the most active voices in the Colombian cultural scene. His work (and that of Manrique) has been widely exhibited in cities, such as Bogota, Cali, Berlin, Madrid, Lulea, Tel-Aviv, Boston, NYC, and Copenhagen, among many others. Ospina is also a prolific curator. Often, when required to provide a bio of himself, his response will be: “Sometimes he draws, sometimes he writes."