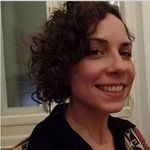 Sara Blaylock received her PhD in Visual Studies at the University of California – Santa Cruz in June 2017. Her doctoral thesis “Infiltration and Excess: Experimental Art and the East German State, 1980 – 1989” focuses on artists who used body-based practices, like performance, film, and photography, to create new vocabularies for representation, as well as their uses of reproducible media in the creation and circulation of their work. “Infiltration and Excess” argues that experimental practice was not only an antidote for, but also a diagnosis of a weakening state: a foil and a mirror to official culture. Sara is a new Art History faculty member in the Department of Art and Design at the University of Minnesota – Duluth. Her research has been supported by grants and fellowships from the German Academic Exchange Service (DAAD), the Rosa Luxemburg Foundation, and the College Art Association, which awarded her its 2016 Professional Development Fellowship in Art History. Sara has published in numerous academic and arts forums, including Gradhiva and the exhibition catalogue Gegenstimmen. Kunst in der DDR 1976 – 1989 [Voices of Dissent: Art in the GDR, 1976 – 1989]. She has forthcoming texts in Cinema Journal and in the Handbook of East German Cinema: A DEFA Legacy. Sara also co-directs the International Association for Visual Culture.